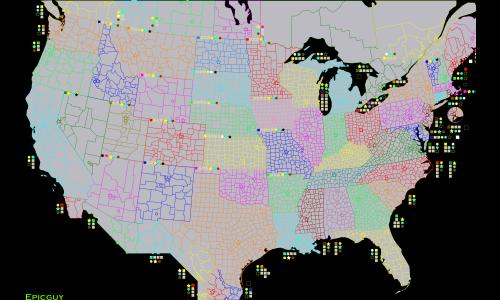 This is a map of the US counties for each state as well as state capitals and the largest cities in each state, it is accurate to the closest detail possible. This map is based off of a very accurate and detailed map and the bonuses are referenced from "United States Big [3.1K]" created by rashaz and updated by Gunz.

V.1.2 - Plan to address any bugs, mistakes, and errors brought up. Adding in more Distribution Modes and Scenarios.

on 9/1/2020.
Very off balance.
Response by map creator Epicguy on 10/11/2020
Admittedly it is unbalanced and I do acknowledge that, the issue I found was how to balance the bonuses for Canada and Mexico given the cutting off of most of the land from those countries due to file size and territory limit.
The issue is further complicated by the fact that
1). not all of the land is available for occupation (in Canada and Mexico),
2). the population/population per capita is greatly varied across the US counties, Canadian divisions municipalities, and the Mexican municipalities, and
3). given these differences how to set the bonuses such that everything is more or less balanced.

Once I have the time, I will get back to adjusting the map to fix bonuses but I put them there for customization to scenario creators so if the host only wanted to use the US Counties, the land in Canada and Mexico can be 10000 army wastelands, or really any modification to bonuses and territories to give way for specific changes.

Any and all constructive criticism is welcome and taken into account.
6 out of 6 people found this review helpful.
Review by pitulnik on 9/4/2020.
This awesome map deserve more attention and publicity. It is incredicible complex and I admit that I will not be able to make as pre- rewiew work as it would be ideal compared to the other maps, this is just too much large for me.
Graphic is good and map is fun to play on it. Howewer, as Bohogotot says, this is not a balanced map. It's nice to have Canada and Mexico there, but their overall bonus is too high.
It is all based on population, I suppose? The city bonuses are spread totally uneven.
And what about the 3'city bonuses? I find many times that one territory has more than one of that bonus(I will send the list via email).
So, I find this map not finished yet but still awesome piece of work and I wish that it will become one of Warzone core maps like ROR.
Response by map creator Epicguy on 10/11/2020
I really appreciate the positive feedback as well as the criticism, I addressed the balancing issue on Bohogotot's review.
The high bonus of Canada and Mexico is supposed to be representative of the countries but also take into account the territories there are and population/density. Speaking of that, because of the first-level administrative divisions (counties, municipalities, and census divisions) that each country uses and the differences between them in terms of size, population, and density it is very hard to get everything balanced.
Cities are there available as feature that hosts can use if they need it for custom scenarios but they are going to be inherently imbalanced just due to how close some cities are.
I will fix any missing connections that I may have missed whenever I have the time to do so but as a college student it won't be for a while which is also why I haven't responded until now.