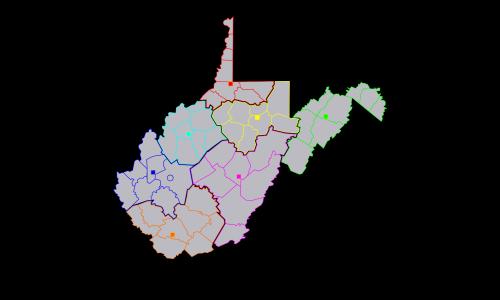 Warzone's first map of the state of West Virginia.

This map depicts the 55 counties of West Virginia, in addition to the Charleston Metro.

Although I likely won't get around to replying to any reviews, any feedback is welcome and I will do my best to incorporate any improvements I feel necessary for best gameplay in future versions.

Seleukos on 6/12/2020.
A cute little map of West Virginia, it however suffers from some design and gameplay shortcomings. In several territories the army location is at the territory's edge, rather than the center. That seems careless. I also didn't notice there was an insular capital metro region until an AI army attacked from out of it when I thought I was safe. If its circle were made bigger and its surrounding territory's army marker were moved further away, players' peripheral vision would be less likely to confuse the two. As for gameplay, all the bonuses contain 8 territories and give anywhere from 2-4 armies, which seems to depend on the centrality of a bonus. That feels too granular for my taste, and also gives too much of an advantage to a player that gets the one that gives 4, since it takes so long to conquer a second bonus. The two edge bonuses that give an income of 2 have many of their territories arranged in a linear manner, which is seldom a good thing, when it comes to gameplay.
0 out of 0 people found this review helpful.