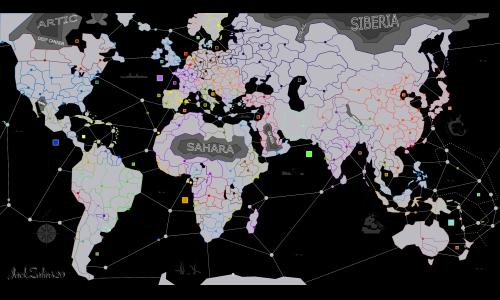 The world nations are on the edge of a war. Tensions built up over decades are now at their peek. Will the major empires have a quick win? Or will their vassals betray and undercut them? Only time will tell.
This medium-large map is set in 1914, not only this affects the borders, but also the density of territories (which is higher in Europe and lower in USA compared to nowadays) and the value of bonuses. I tried to balance every aspect of a potential diplomacy. The map is built to have British Raj, Canada and ANZAC as British Vassals; Indochina and/or Madagascar French vassal. This way the game is balanced, otherwise Britain and France are highly overpowered in Europe compared to what would be realistic in 1914. You could also put Finland, Ukraine, CongressPoland as a Russian Vassal if you want to nerf it a bit (I personally wouldn't because Russia in 1914 had the largest army in the world, but I do understand why you would). Thanks for reading, maybe write a review, but most importantly... ENJOY THE MAP! :D