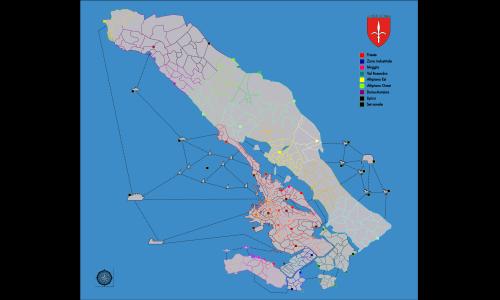 The provincial territory of Trieste is almost entirely included in the Carso district. Until 1947 the province was divided into 30 municipalities on an area of 1 278 km². In 1938 the resident population was 351 595 inhabitants with a density of 76 inhabitants/km². Only the 212 km² mentioned above remained in Italy.

The provincial territory is included in a narrow (5-10 km) strip of land about 30 km long, which stretches between the sea and the Karst plateau (about 400 meters above sea level) from the north-west (province of Gorizia, Monfalcone, Gulf of Panzano) to the south-east (Trieste), bordering on the east with Slovenia (coast) and on the west with the Gulf of Trieste (in the Adriatic Sea). Its peculiarity, given its size, is the absolute logistical centrality of the city compared to other municipalities, in fact a sort of neighborhoods partly incorporated into the urban fabric.