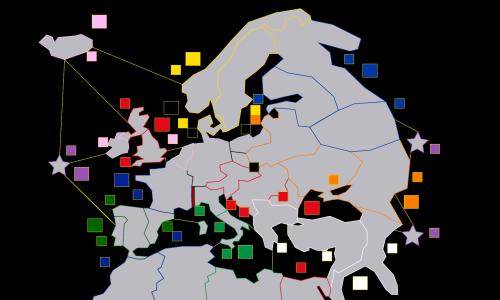 Warning: This is NOT to simulate anything but diplomacy. Please do not associate this map with World War I (Although you are free to play WWI games on this map) and tell me the mistakes I made. This map should ONLY be used to simulate Diplomacy.

Roman Empire on 8/25/2020.
A good small diplo map
On the good side, the amount of territories is enough for 2 players from my point of view. I can add that I played with 3 AIs and the map wasn't too small for it. A big plus is that the map is well-balanced and each starting position gives you a chance to win.
Among the mistakes I see inaccurate historical territories, and all territories on the map could be marked with their full names. Warzone gives you an opportunity to name bonuses the same as the territories they consist of.
Summarly, I liked this map.
2 out of 2 people found this review helpful.
Review by pitulnik on 6/11/2020.
This map is designed for diplomacy games. But it doesn't have enough territories for any standard diplo game. The map is unsuitable for the proposed purpose. Territories don't have full names, like "Sil" not "Silesia".
Even historical mistakes: India should be part of British crown, not independent. Part of the Ottomans is called Iraq, but Iraq was British, if you want to use that name. Soviet Union(!) controls the territories that are independent today, but they were parts of Tsardom those times. And why you couldn't attack France from Italy, but you could attack Germany? IRL it was the opposite.
Playing as a an usual team game)not diplo) offers some playebility, but just average. So, the positive thing? Try this map https://www.warzone.com/Map/36167-Medium-Europe, this one is much more better and don't waste your time on this one.
Response by map creator

Nikitan on 6/22/2020
Thanks for the review. Not very positive, I'd say, maybe a bad gameplay experience for you. I was trying out a new concept of "tiny diplo maps".

Also, this map is not historical. Although I did put some historical scenarios on this map, it is not supposed to represent anything historical. The reason India was not part of Britain was that I wanted to make a balance between the nations, and putting India under the British Empire simply breaks that balance.

Right now I want to rename the map "balance of power", but I can't change the title of a map when it's published so I can't do that.

Also, notice that the other map is also mine.
2 out of 3 people found this review helpful.