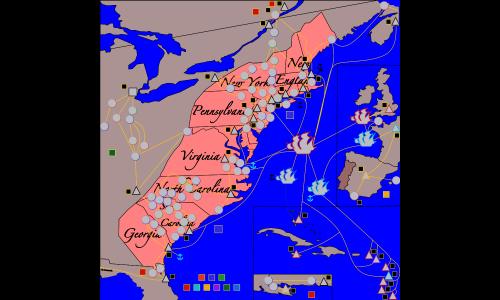 Battles of the American Revolution

This map has almost all the battles of the Revolution in the Colonies, Western Europe, the Caribbean, and West Florida. Battles are circles and cities are triangles. Battles have the border color of the victor. (The Caribbean islands have borders of the controller, and no islands connect directly-if you want to conquer an island, you have to do it by boat)

Review by crom on 7/8/2019.
Too many randomly connections for a chaotic map
Response by map creator leviavery on 7/8/2019
The connections can be hard to follow sometimes, but for the most part they follow the major campaigns of the war. For example, Yorktown is only connected to the battle of Green Spring and the French fleet to attempt to show how Cornwallis became trapped on the peninsula and was forced to surrender
1 out of 1 person found this review helpful.