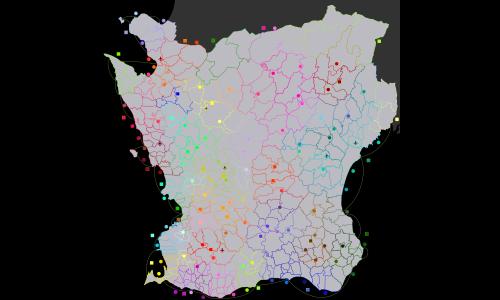 This is a detailed map of Scania (or Skåne); the southernmost county of Sweden.

* Each territory represents a so called "socken" (except for Hallands Väderö, which in reality is a part of Torekov socken) - a small area generally containing one or a few towns or urban areas.
* Bonuses with square bonus markers represent municipalities - administrative districts within the counties of Sweden.
* Many municipalities are too large on their own, so for the sake of balancing gameplay, they are split into smaller areas. These are roughly based on the smaller municipalities that existed between 1952-1971, and are marked with round bonus markers.
* Additionally, there are seven territories containing airports (marked with an airplane icon). All airports are connected to each other, making them an interesting feature which may affect gameplay.

Colion on 5/16/2019.
It's a pretty nice map, clean and has interesting connections. Gameplay is fun at first, but drags on due to size. Great map, but it certainly isn't the second best map in Warzone.
0 out of 0 people found this review helpful.