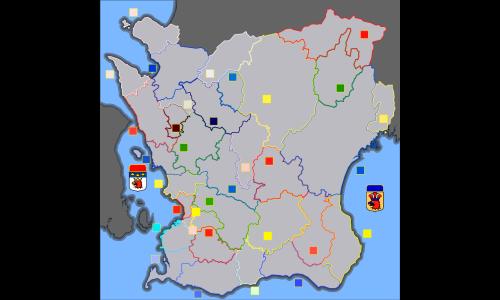 Scania - the southernmost county of Sweden.

Each territory represents a municipality, and the value of its corresponding bonus is based on the GDP per capita of the municipality. Moreover, there are two large bonuses representing the former counties of Malmöhus County and Kristianstad County, which merged to form Scania County in 1997.

Seleukos on 2/12/2019.
Not bad for a first map. I'd comment on the squiggly borders, but I see that you've already mastered that aspect in your followup map. I will, however, bring up the superbonuses. They are so profitable that, in a two player game, anyone who would manage to gain one would be certain to win, as it would double their income. That effect might be intentional, but I prefer to have things a little more fluid in my games.
0 out of 0 people found this review helpful.