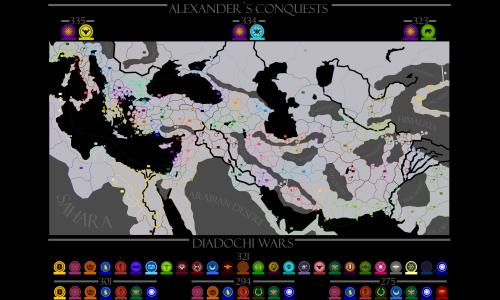 Philip II, king of Macedon, had great plans. He had united most of Greece under the League of Corinth and had his modernised army ready to invade Persia.
Then he died.

His son Alexander, only 20 years old, had to consolidate his rule against a coalition of Illyrians, Thracians and rebellious Greeks.
Afterwards, he crossed into Asia and conquered the vast Achaemenid Empire, all the way from Egypt to the Indus and the Scythian steppes.
Resistance in India made him turn back to secure his conquests, but Alexander had great plans yet: revenge against Carthage, exploration of Arabia, invasions of India.
Then he died.

It didn't take his generals long to carve up his empire into fragile, volatile states. All of them tried to conquer the others to be the true heir to Alexander.
In the end, they all died.

This time it is up to you. Can you succeed where Alexander failed: to conquer the world until there is nothing left to conquer, and to build a lasting state?

Julian on 12/20/2018.
I really enjoyed the safety of the towers/ castles. You do have to be careful when selecting starting territories, as some give you a lot more.
3 out of 3 people found this review helpful.
Review by Den-Sel on 12/25/2018.
Great map. I love all the variations that are possible. I am making a bunch of levels for it.

My main (minor) quibble is the bonus system. I wonder why the default for all bonuses is 0. It would help if some of those bonuses were active (we can adjust manually, but it is a pain to figure out what's what). Also, I know the point is historical accuracy, but the bonuses are very unbalanced and some are practically impossible to get (except for very specific player-defined scenarios). So, it would be nice if there was a set of optional balanced bonuses for regions (and those could be used for the default "Full distribution", which does not reflect any historical scenario anyway).

Finally, something's wrong w/ Taurini and City of Mediolanum. It doesn't allow you to attack Mediolanum from Taurini.
Response by map creator Murk on 12/26/2018
Ah, you mean the "superbonuses" of the Diadochi? They're at zero because, as you say, they're unbalanced and practically impossible to get in normal distribution games. They're there as historical fun facts, or to help with diplo's/scenario's - but in FFA games they're useless.
I could indeed make some geographical superbonuses (rather than historical owners) also. I'll look into that.

Thanks for the review!
2 out of 2 people found this review helpful.
Review by Mephistophele on 12/24/2018.
Really nice map.
Made a lot of fun playing this one.
The value of the cities make it important where to start, but is seems to be well balanced.
The design is well done and the back story is fantastic... who doesn't love Alexander the Great (Megas Alexandros)?
1 out of 1 person found this review helpful.
Review by Sharpsh00t€r

on 4/2/2019.
Great detailed amp with huge number of territories.
1 out of 1 person found this review helpful.
Review by