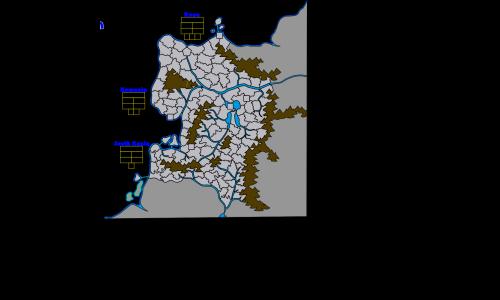 This is a map I made a few years ago. only until now I made a first version of it in warzone. Koniä is only one country and it is part of a continent of which I also made a map, called Daléros.

This map is nice to look at and even fun to play on. I had to downrank it, however, because it is woefully imbalanced. Not only is the north isolated and fairly easy to defend, relatively speaking, but it is also vastly overpowered. Having one territory provide fully 20% of the map's bonus armies simply makes this a race to control Kona City. KC is not even in the middle of the map, so there cannot be a "race to the center for a bonus" angle to the game.

Moreover, that OP bonus is way too isolated. A player holding just 5 territories (Kona City and Stonewater - which between them only have 2 exposed territories) receives a bonus of 14 armies. That is the same amount one gets for conquering all of South Konia - 49 territories!
Even eliminating the Kona advantage, the "regular" bonuses vary greatly in value. Kelwood gives 3 armies for 8 territories, while neighboring Eltus grants just 5 for 19 territories.
The 1-point cities are too few and far between to remedy any imbalance.
Response by map creator

Koen27 on 11/9/2018
Indeed Kona should be just 1 (or maybe 2 or 3). I will change it. Thanks for the feedback.
If you liked this map Im sure you’ll also like my next one. This one is only 1 country of a much bigger map which i am currently working on. I’m hoping to finish the map before the end of this year.
2 out of 2 people found this review helpful.