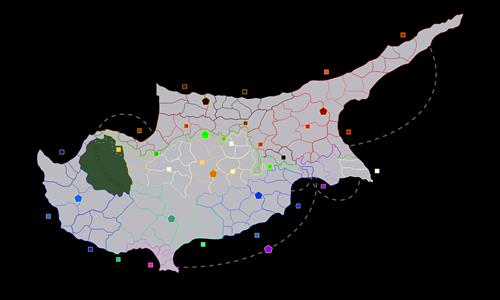 Since the Turkish invasion of 1974, Cyprus has been divided into the de facto territory of the Republic of Cyprus and the occupied territory of North Cyprus, which is recognized only by Turkey. Between the two lies the United Nations Buffer Zone, or Green Line, which passes through the capital, Nicosia. Political boundaries are further complicated by the presence of two sovereign base areas belonging to the United Kingdom.

The country's six districts are faithfully represented as superbonuses, as are the Green Line and the British sovereign base areas. Regions are based on cities, towns, villages, or airports; their borders are conjectural since I couldn't find any maps with that level of detail. Some bonuses faithfully represent the three UN zones and the two UK bases; the rest are conveniently sized subdivisions of district superbonuses. Some naval and overland connections were provided wherever I deemed them sensible.

on 4/30/2018.
Great map. I played around with it making custom scenarios and think it's just great all around.
Response by map creator

Seleukos on 5/1/2018
Thank you!
1 out of 1 person found this review helpful.
Review by FalranMcKi YY49 on 5/1/2018.
Awesome, I like the idea of a map where there are two influential powers at play, it can be fun that way, in fact, it would be awesome if you could do a map of greece vs turkey or something like that
Response by map creator

Seleukos on 5/2/2018
Hm, that's not a bad idea. Of course, Turkey would be much bigger than Greece in such a setup, unless I were to make Turkey's regions bigger to balance things out...
1 out of 1 person found this review helpful.
Review by Daryle on 5/19/2018.
Fun Map good bonuses
Response by map creator

Seleukos on 5/19/2018
Thanks
1 out of 1 person found this review helpful.
Review by Arachnocat14 on 6/3/2018.
The unique bonuses make for some very interesting gameplay. Great for medium FFAs.
Response by map creator