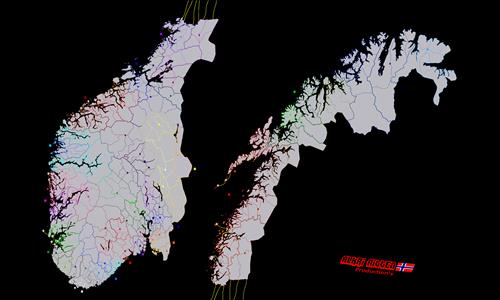 This is a Detailed map consisting of all the 428 municipalities(as of 2013) of The Beautiful country of Norway.


This map is the first map ever i have created. I have spent a lot of time working on this. Most of the time was spent on failing, and learning how to use Incscape. I have plans on making a new map.

There are a few flaws on the map, so i had to improvise on some territories and bonuses, since i didn't want to start all over.

I hope you will enjoy it!

It has two flaws, neither of which is the maker's fault. First, Norway's coastline is insane. It's incredibly difficult to follow, but the maker does a fine job making the connections intuitive (or as intuitive as they can be, anyway).

Second, this map gets very linear in the north. Again, so does Norway. I might suggest using a few coastal territories as ports that connect up and down the coast. For example Halden > Larvik > Farsund > Stavanger > Bergen > Solund > Selje > Smola > Fosnes > Traena > Rost > Lenvik > Hammerfest > Vardo.