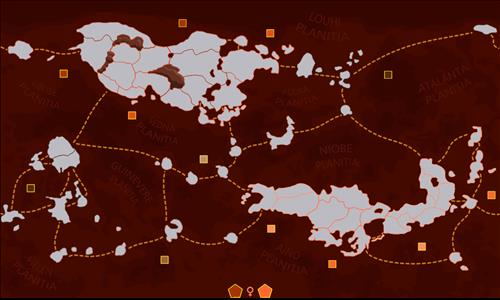 Spread and prosper, little extremophiles! The world of Venus is yours for the taking!

This map is mostly based on a 1980 (not copyrighted) one from NASA Ames Reseach Center, U.S Geological Survey and Massachusetts Institute of Technology, using data from Pioneer Venus Orbiter; with some additions from subsequent Magellan observations. Depending on where one sets the 'sea level', the size of landmasses will change. A lower level would particularly result in more playable land in the south, which is mostly empty here and cut off at -60 degrees latitude. The north goes up to +80 degrees latitude, and is rather deformed, making Ishtar Terra look bigger than Aphrodite Terra (the opposite is true). I used real names for all the regions, but some may be a bit off because of my inability to find detailed enough maps for all regions.