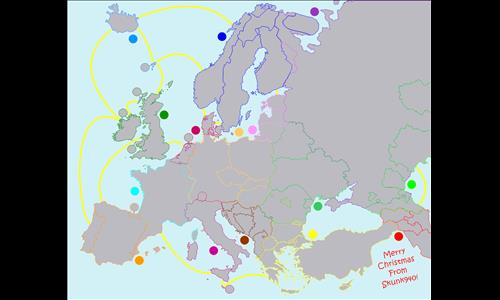 Once again Christmas is just around the corner! What more could you wish for to celebrate it with then another Europe map!

This year’s Christmas map consists of a map of Europe via the magical person who delivers presents to the people of Europe.

Merry Christmas to all!!!

lovrohrkac on 12/12/2017.
Very good idea! I like how you made map with nationalities! I found some mistakes. Estonia owns a part of Karelia(FInland should own it) , it is Djed Božićnjak in Croatian also why isn't Bosnia and Hercegovina splitted by Croatia Serbia and Bosnia Hercegovina? Why are the Kurds left out?
Response by map creator

on 12/13/2017
Hi Lovrohrkac, thanks for the feedback! I combined some of the groups in the Balkans as some of the territories that were too small in too compact an area. I also left the Kurds out along with Africa as I wanted to just include Europe, to be honest I was a bit cheeky in including parts of Kazakhstan and Iran!
2 out of 2 people found this review helpful.
Review by