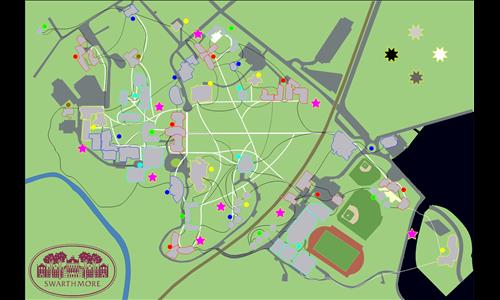 “The Kremlin on the Krum.”
~ Spiro Agnew on Swarthmore College

Swarthmore College is a small communist insurgent training facility found in the metropolitan area of Swarthmore.

Swarthmore College was founded in 1923 by a small group of spies from the recently created Soviet Union. They were acting as part of a larger communist plot in conjunction with various agents in place around the country in various political, social, and civil positions whose goal was to bring about unrest with the capitalistic system among the proletariat so as to drive them to overthrow the corrupt bourgeoisie. Swarthmore College immediately began this by teaching "liberal arts" to the youth of the country, manipulating their minds to see the glory of American capitalism as a dangerous thing. As evident from the class of 1927, the communist agents were widely successful in their goals.

Review by PJABBER on 3/28/2019.
Used to live right by the campus and it was fun to play this out!
4 out of 4 people found this review helpful.