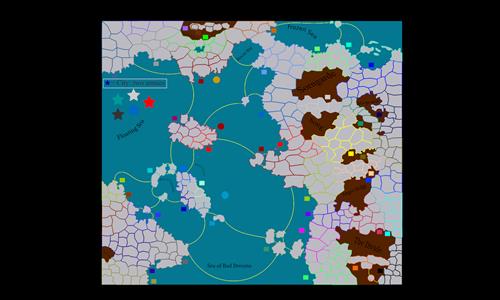 Welcome to the island of Panerma and surrounding continents, this map provides a mix of island gameplay and inland continents with mountain, but what makes this map special is that the landforms were not made by me, but were randomly generated - I simply traced the land that was created, with a few minor details.

on 10/2/2017.
Even though the map is only mid-sized, it plays much larger due to the isolated nature of several regions, in particular the northwest and southeast. This slows down gameplay quite a bit. This is compounded by the atypically large bonus values, which enable lucky players to huddle in their corners while amassing disproportionately sizable armies. The bonus size is not a fatal flaw and can of course be adjusted, but it does exacerbate the isolation problem.

Also, there really should be a margin left around the outside borders of the map in order to make viewing and zooming easier. As currently drawn, some of the menu and other features sometimes intrude inconveniently into the map space.

Also, Riki should connect to Rivi-Kin.
Response by map creator Doctordynamo on 10/3/2017
Thank you, I've expanded the margins and fixed the broken connection. I've also added a few extra connections in all four corners to reduce the isolation and slightly decreased the amount of armies given for some of the larger bonuses, and increased the value of controlling the islands.