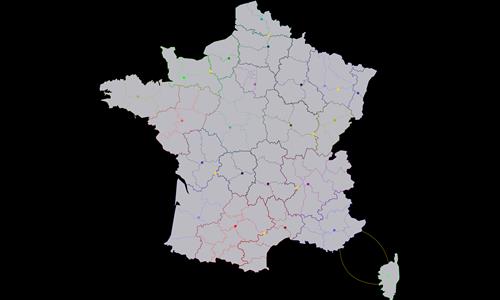 Too bad I sort of have to leave 1 star for.. obvious reasons.
7 out of 8 people found this review helpful.
Review by Murk

There's nothing good about it either. There are already three maps using the departments of France, and all three are either bigger, more detailed, or have other gimmicks (cities or neighbouring countries).
The map art, too, is alright, but not above average in any way.

In short, there is no reason for this map to be made. Everything it is already exists.

The most jarring, however, is that somehow you managed to get this rated over 80 times within a day, almost all of which gave it a five star rating and left comments such as "best map ever" (which it clearly isn't)(those comments somehow disappeared, too).

I don't know if that is French patriotism, if you have a lot of good friends, or if it is some other trick, but it doesn't help the validity of the map rating system one bit, and to offset it slightly I can only give this map one star.
7 out of 8 people found this review helpful.
Review by