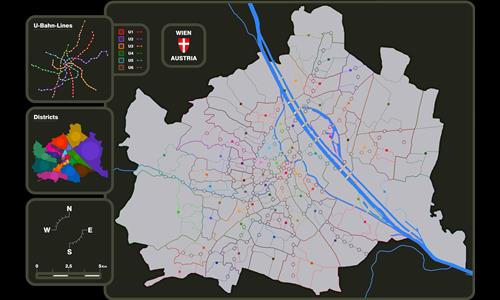 on 10/6/2017.
It's a nice enough map (although there a connection broken between Ober-Baumgarten and Huetteldorf), but for a map about subway lines, it feels like the conflict over the lines themselves is secondary.

No one can realistically capture an entire line until the endgame, so they have no bonus value. Tactically speaking, it's easier to defend the land bonuses, even from multiple subway stations, than to attempt something that will span the entire map. I recommend trying something different - perhaps making each subway station worth one bonus army (or more, for the stations with multiple lines passing through them). This will force players to focus on the subway.
Response by map creator

on 1/23/2018.
Really cool idea. I think other maps will mimick the idea of multiple paths. I found many of the connections hard to understand without resorting to clicking on a territory. More clarity about that would make the map more fun to play. I won against 3 AIs relatively easily because I got a great starting position. I suspect that usually this map would be very difficult because of the high connection degree. Takes much longer to play than other maps I've seen with a similar number of territories.
1 out of 1 person found this review helpful.
Review by Erzherzog

on 5/7/2020.
a very good and authentic map.
I am from Vienna and here are all districts and their subdivisions are well named as well.