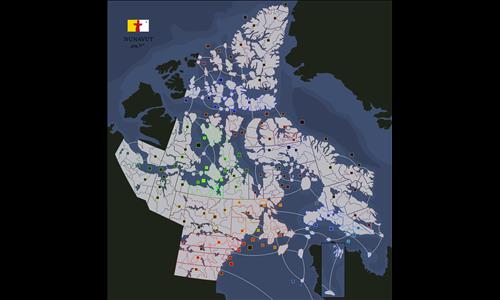 Nunavut is a vast and sparsely populated Territory of Canada. Most of the territory is Arctic tundra.

Clint Eastwood on 8/9/2017.
Wow. Five stars. It's huge (for such a barren place), it looks nice, and it plays well. It seems you've already peaked as a mapmaker, and you haven't even been at it that long. Keep up the good work.
Response by map creator Toluene on 8/10/2017
Wow thank you! Already peaked, well, we'll see about that. I've re-made a lot of failed maps which gave me some practice without having to publish many maps.
7 out of 8 people found this review helpful.
Review by A_B3 on 8/11/2017.
The unusual design coupled with reasonably balanced territory bonuses makes for an entirely entertaining game.
7 out of 8 people found this review helpful.
Review by

on 8/22/2017.
The connection of the two islands in the south, I do not like at all. Otherwise super map, playable 3-5
Response by map creator Toluene on 8/22/2017
Dashed lines should aid those connections.. but that is how they would connect if they were part of the main map.
3 out of 5 people found this review helpful.
Review by