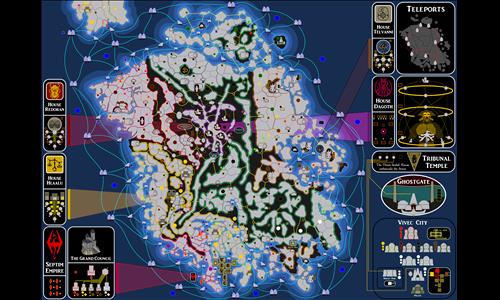 This is a new version of Vvardenfell map, designed primarily for large diplomacies.

Some bonuses might be considered complicated (even though there are indicators to help you find all the corresponding territories) - so tags are added to bonus names in order to make the editing easier. If you want to turn them off, you won't have to scroll all over the bonus list.

Ranek on 4/21/2017.
This map is massively packed with Morrowind features. Its like a warlight adaption of a Vvardenfell fangasm. Fortunately the author figured out different ways to unravel the confusion of informations. realms and special bonusses as well as spatially seperated territories are highlighted. cities have different shapes depending on the realms. the bonus systems are seperated in frames, that represent different councils. further little artworks help to understand the intentions and overall gameplay.
Overall a fantastic and very unique map, which I would recommend for advanced players only, who enjoy massive rp or diplo games. though, the map is rather not suited for competitive games .
Response by map creator Gallien on 4/22/2017
Maybe for large FFAs? They never get strategic anyway :)
But of course the main audience is diplomacy/roleplay gamers.
And there can also be custom scenarios.
P.S. And thank you again, Ranek, for helping me to make this map playable!
3 out of 4 people found this review helpful.
Review by Nathan

on 4/22/2017.
This map is incredible. I've never been an Elder Scrolls person, but I find myself reading up on Morrowind just to be able to understand this more fully. The map is beautiful and after a playthrough or two your understanding will be much more complete. Kudos on a true masterpiece!
Response by map creator Gallien on 4/22/2017
Thanks, Nathan! You're very kind! :)
P.S. There are probably too many books in Morrowind, so if anybody wants a SHORT introduction to all the factions shown on the map, I would reccomend reading "A Short History of Morrowind".
2 out of 3 people found this review helpful.
Review by

on 5/11/2017.
Interesting map with many opportunities for interesting roleplay. You can create complex stories and roles with the territories and bonusses.
I also really like the teleport territories. Could be 1 or 2 more but it's fine.

The map looks a bit crowded though. But so much stuff has to be put somewhere.
If you want to play this map it is really recommended to take a closer look at the bonusses (balanced startingpositions might be difficult to achieve).
Response by map creator Gallien on 5/11/2017
Thank you, Snife!
I think the terrain contributes to the crowded look. May be I should have simplified it more, but it would require another total remake of the map.
1 out of 1 person found this review helpful.
Review by Perhaps

on 4/22/2017.
There is no link between:
Llaram Family
-- and --
Canal North-Three
Response by map creator Gallien on 4/22/2017
I'll fix it immediately. Thanks, Perhaps!
P.S. After rechecking some potentially problematic connections one more time I deleted an unnececcary connection in Odirniran - Coast of Azura south. I really hope there won't be any more connection problems.
1 out of 2 people found this review helpful.