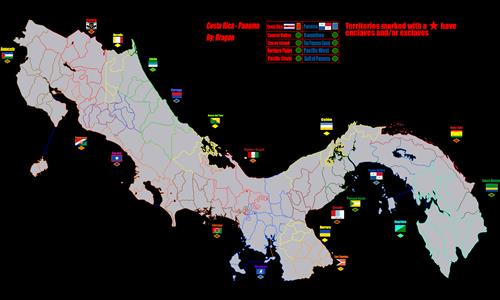 This is my first map so I really would appreciate constructive criticism in case I want to make another :P

One thing holding it back, in my opinion, is the lack of multiple connections between the islands and the mainland. Flow would improve if the Cocos Islands connected to, say, Osa to the east, and if Balboa connected to a territory in Panama Oeste. Montijo could connect to somewhere in Chiriquí, but this is probably the least crucial link since Montijo is already off to the edge of the map, anyway.

And, as always, how about some blue water? :)
4 out of 4 people found this review helpful.
Review by Clint Eastwood on 2/16/2017.
What Nathan said, plus a couple other things.
One, your bonus borders overlap. PM me or any other mapmaker if you need some help, but bonus borders should never overlap--you should be able to see the colored borders of both bonuses. Best case scenario, it looks bad. Worst case scenario, as with the case of Sambú, you can't even tell it's a part of the Emberá-Wounaan bonus--it appears to be a part of Darién.
Also, the positioning of San José and Cartago seems a little off to me. I've been to both, and I can confirm, both from Google Maps and firsthand experience, that San José is west northwest of Cartago. Your map is probably accurate (especially considering that it's your home country), but it just looks weird to me. I guess that's more of an opinion than a legitimate problem, though.

And emphasis on the lack of island connections. They need more.

So, the main problems: overlapping bonus borders and not enough island connections.

All in all, though, great first map. A lot better than my first map.
4 out of 4 people found this review helpful.