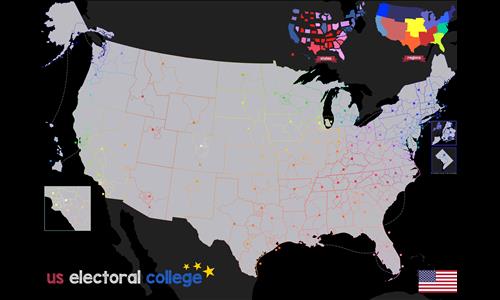 A mapping of the United States' 538 electors in the electoral college following the 2010 Census.

Xtremeone23 on 8/12/2017.
I love this map. I'm so gonna use it. The one problem, in my opinion, is that for each state they should get a number of bonus armies equal to their electoral college votes. (Eg. North Carolina has 12 and should have 15)
Response by map creator lonely star on 9/1/2017
Thanks, I've changed the state superbonuses so the total bonus armies for each state is equal to its number of votes now
6 out of 6 people found this review helpful.
Review by Nathan

on 8/10/2017.
Love the map, but it would be even cooler if there were exactly 538 bonus armies to be had.
5 out of 5 people found this review helpful.
Review by SiVisPacemParaBellum

on 8/31/2017.
A few linking issues I've spotted so far:
- In Hawaii, Kauai shows a dashed line to Santa Cruz in California but there is no connection.
- In the Washington State area, Olympic Peninsula has a large border with Yakima but they are not connected.

Otherwise, a great map!
Response by map creator lonely star on 8/31/2017
Ah thanks, but I'd already just fixed those (and some others) in v1.2
2 out of 2 people found this review helpful.
Review by

on 8/9/2017.
Beautiful map!
Response by map creator lonely star on 8/10/2017
Thanks :) your YouTube tutorial really helped me haha
1 out of 1 person found this review helpful.
Review by i am not me on 6/26/2018.
alright so the reason why I like this map so much is because the rest of the USA maps either have too little parts, or way too many. this map, however, has over 300 and less than 2500, so that makes it quicker to do, also the electoral college thing is kind of similar to a population density thing, and I REALLY like those because you can see cities and sh!t! byeeeeeeeeeee
0 out of 0 people found this review helpful.
Review by