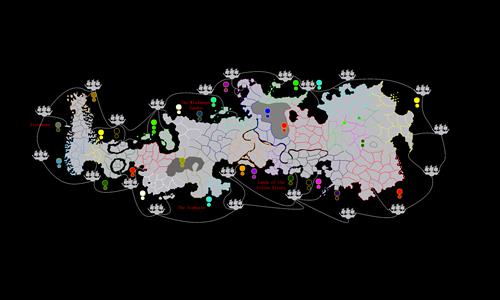 The bitter cold land of Storall is divided amongst many squabbling kingdoms. The Storm-men of Stormwake are fiercely independent in all but religion, in which they all agree that the Storm is supreme. Across the Icewaste, Windswept Tundra, and Lands of the Frozen Rivers, Father and Mother Earth are worshipped for good harvests and peace. In the Eastern Woodlands, the Twins are worshipped by a devout population whose elite seek to take all in their Lords' names.

on 2/21/2017.
Solid map, but the far western areas are a bit overpowered. Players can lock down over 70 bonus armies just by controlling three territories: Doryan Waters, Thunder Bay Entrance and Crusaders' Desolation. This could be improved by connecting Ordyr Island to the mainland to the south and/or east and House Manblood to Westmark.
4 out of 4 people found this review helpful.
Review by sherron on 3/3/2017.
The 5 army a turn strongpoints/castles (squares) is a fun twist. The high value strongpoints changes your priorities. I am not sure the AI had quite got the hang of this feature of the map.
2 out of 2 people found this review helpful.
Review by

on 8/26/2017.
It is a fun balanced map, I like the chokepoints that are created by the rivers, however i think that the bonus areas are a bit big and the castles are worth to much. The gameplay was good and challanging sometimes, this is a great map with abandon cards
0 out of 0 people found this review helpful.