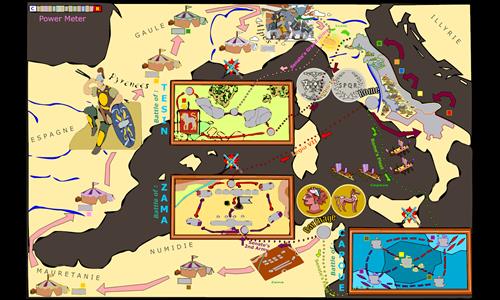 Map by Robbie.
Have fun playing 1 vs 1 or with teammates as you follow the main campaign and three decisive battles.

*Note the power meter in the top left corner and several player-based icons on the campaign map.

Review by Andalorium on 1/4/2017.
A small map made for small battles and because of how the default bonuses are set up, most of the time will need to rely of base income whatever it is set at.
3 out of 3 people found this review helpful.
Review by Nathan

One - it's visually cluttered in the extreme. It's hard to see where territories are. This makes for headache-inducing gameplay.

Two - there are lots of territories with no bonuses. I can understand some, but there are many places on the field of battle that I think would be beneficial to hold.
2 out of 2 people found this review helpful.
Review by

Onoma94 on 2/16/2017.
Nice graphics, but just not much of a map. Also why french names instead of latin or english ones?
0 out of 0 people found this review helpful.
Review by Den-Sel on 1/26/2018.
Map is unusual and I like the art and the concept. But it's impractical because it's not easy to figure out what are the territories that count until you actually play it. Also, too few bonuses, particularly w/ the negative bonuses there. Map is also too small.

Gameplay is pretty bad though. Positions are unbalanced. If you start at Massinisians, your income is 7, and going west, it gets to be 8, 10, 9, and 11 when you reach Gaule. From there, you go down to 10, and then no more bonuses as Rome can capture the 3 of the Battle of Ticinus ("Tisin"? Really? LOL) much earlier. In other words, starting from Canusium, you go from 7 to 8, 9, 10 when you reach Yelen. (Note that Campana w/ the negative bonus is out of the way, not connected to anything useful and does not need to be captured for any reason, by anyone. Dead space.) From there, in 3 turns, you're at Second Command Post and you are at 13 income (assuming stalemates in the other battles, which can provide no possible added income anyway).
0 out of 0 people found this review helpful.
Review by RobGodkin on 1/4/2017.
In 1vs1, you really have to predict where your opponent will go to win the battles.
Strategical gameplay is maximized in 3vs3, where you can use your teammates' income to field larger attacks on enemy positions.
2 out of 5 people found this review helpful.
Review by rowdent vermein on 1/10/2017.
cool
1 out of 3 people found this review helpful.