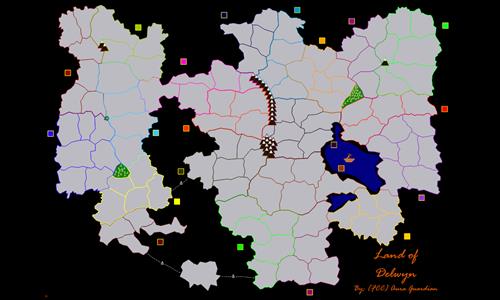 Just before the warrior Lane-Targon of The Free Cities Arrived to Time's Pass to engage in battle with the invading Dwarves, he reflected on his past adventures: His affair with the beutiful elven lady, Shira, from Flaamecela, the "gardening" of the gnomes at Aumbur, and even the failed mission to take back Cho-Thu-Gul from the Silvered-Eyed Ones. He reminisced in his conquest of the Fortress of Darkness, and the awe-inspiring discovery of the Glass Cities, and his important role in the negotiations at the Seven Rivers District to bring the area under the banner of The Free Cities. Knowing this, he proudly and confidently marched his way into battle. Suddenly, a dwarf came out of ambush, and cut off of his head before he could even unsheathe his sword. Thus, Lane-Targon of The Free Cities was no more.

Credit for the idea goes to the Random Polygon Map Generator hosted at students.stanford.edu

Also, I lost my hat. Can someone help me find it?

Thanks All!
[FCC] Aura Guardian

Review by Andalorium on 2/17/2017.
Decent map with no noticeable flaws, and if you really have lost you hat try checking the top of your head first then the last spot you remember wearing it. But if it was a grey beanie then I took it and am now wearing it.
0 out of 0 people found this review helpful.
Review by wickidd on 10/22/2021.
this is impossible. way way too hard. what was the point?
0 out of 0 people found this review helpful.