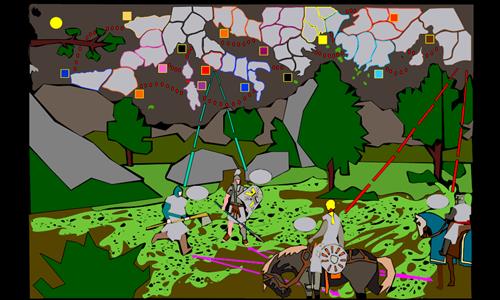 Play one on one, or with teammates. Have fun battling across the night sky and on a patch of meadow.

on 12/22/2016.
Ths map is cool! I like the art and the oniric placement of the actual map. I am still thinking about the combined meaninig of the drawing, title and map. Crusaders (knight, plus the connection of the horsemen)? But there is the legionaire: that would make one think of republican/imperial ancient rome (also the extension of continental europe). But where are the african provinces? So: if your goal was making watchers think, it has worked with me!

As for the map itself it is nice. Some distribution modes would be nice, but one can live without. The main problem is that I find Spain too easy a start, also considering that the transit through the warriors is connecting the middle of the map to the opposite extreme: nobody disturbs spain. Either underrate its bonuses, or find some way to make the west of the map attackable: galleys through mediterranean, or the such... 4/5 though! I like it a lot!
Response by map creator RobGodkin on 12/23/2016
I'm happy to see this map go public.
4/5 WOW!
Thank you for your review brotherdan.
4 out of 6 people found this review helpful.
Review by Empire of Kilos on 12/25/2016.
Pretty nice map.