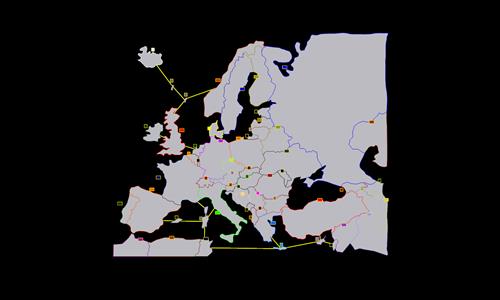 Taran on 2/28/2017.
Another Europe that doesn't even compare to the other Europe maps...
The name is misleading and made me think it was going to be a map of the European Union.
Then I saw it a bit closer and thought it might be Europe.
But nope!
It not only includes Europe, but random parts of the Middle East, North Africa, Caucasus, and even Kazakhstan!

Also, Lebanon turned into Israel and Greece got butchered... I found that pretty strange
10 out of 12 people found this review helpful.
Review by Clint Eastwood on 3/1/2017.
Another Europe map. Last thing we needed.

Poor name choice for the map.

When I saw that Iceland was called Island (which is incorrect anyway, it should be called Ísland) I thought you were calling each country by what they called themselves. But no. Otherwise, Spain, for example, would be called Espana, and Italy would be called Italia. There's no consistency there. Rename them all by their English names, or by their native language's name.

Another thing about inconsistency: how come the France bonus is TWO territories?

Not suited for FFAs, as each territory is a bonus of its own (aside from France, oviously, though it should be).

Not suited for diplos, as it's so small and just all around unbalanced.

I'm sorry, I try to be nice when I rate maps, but I can't find a positive thing about this map. I understand it's your first map, but it's not just your mapmaking skill that's the problem.

I hope this doesn't discourage you. Try again, you'll get better. But take a tutorial.
7 out of 12 people found this review helpful.