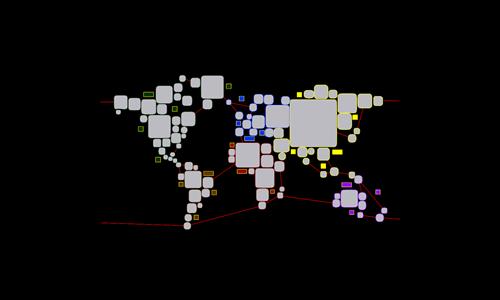 Thanks to redfox011 (https://www.warlight.net/Profile?p=4070360806) for testing. She's the first person to have ever won a game on this map.
Some of the territories are in multiple bonuses. Some, because of unfixable problems, some of them because I wanted them to be. For example, Iceland is in both the Nordic Countries bonus AND the Western Europe bonus--because both are true.
Other territories, like that massive square in the middle of North America, cover swaths of land so large that you can't categorize them into one bonus. The territory in question lies both in Canada, and the US. Thus, it is impossible for one player to control the US, and another to control Canada, as they have overlapping territories.
Many will probably be annoyed due to geographical flaws. Well, look at the map--it's not going to be the most geographically accurate map, is it? Nevertheless, it makes for fun, short 1v1 games.
I consider this to be my prettiest map yet. Which doesn't say much, but whatever.

on 12/7/2016.
my eyes hurt. The document size to big for this map, you always have to zoom first. And finally the borders look very sloppy. Sorry only 2/5
6 out of 7 people found this review helpful.
Review by Castle Bravo on 12/7/2016.
The concept for this map is already lackluster, but the 'square' concept was even more poorly executed than one could have imagined. I have nothing positive to say about this map. It fails in almost every criteria; awkward gameplay, file is too small, weird differences in territory sizes, and visually unappealing. This is part of a recent trend to pump out these "unique" maps that end up unplayable and forgotten.
6 out of 9 people found this review helpful.
Review by Andalorium on 1/17/2017.
Different approach to a world map, not totally sold on the layout, or the bonus distribution.
1 out of 1 person found this review helpful.