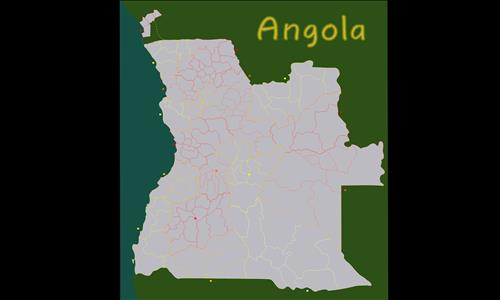 Yet another country which was without a warlight map.
This is the third african country map I have made so far and the fourth single-country map.

Review by Clint Eastwood on 12/24/2016.
Unlike most everyone here, I like the large bonuses, though I do think there should be at least a few smaller ones.
Also, the bonus links are very small. They could probably be four times bigger and still look nice, whereas, as they are now, you can barely see them, let alone the number which they hold.
All in all, not a bad map by any means, but not one that stands out too much, either.
PS: Hate to be that guy, but Angola did indeed have a map before this one; my own map, published earlier that month, actually. You still get the title for largest Angola map, though.
Response by map creator

҈ * TeeMee123҈ * on 12/24/2016
sorry I somehow didn't realise that map existed, maybe I checked before you published it or something. I kind of rushed this map to see how quickly I could make a warlight map. I have a higher quality one coming some point soon but not of angola
2 out of 2 people found this review helpful.
Review by Andalorium on 11/1/2016.
Bonuses are very unbalanced, making a Decent map no fun, rethink the bonuses, and then it'll be worth the time it takes to play. big bonuses don't work for this map
Response by map creator

҈ * TeeMee123҈ * on 11/1/2016
I will play more games on this map and see if it really is unplayable due to the large bonuses. Personally, I think it adds more variety to the game. There are so many maps on warlight, its good to try new things otherwise there's not much point.
If it is unplayable i will update the map with split-in-half bonuses.
I found when doing games that if you just use the 'small bonuses' scenario its quite balanced.
2 out of 4 people found this review helpful.