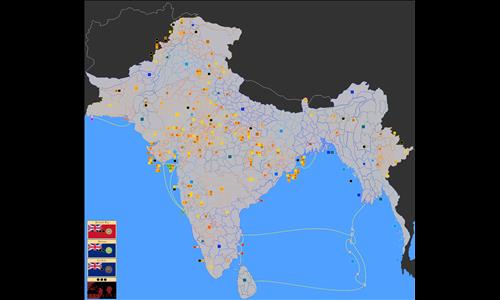 By 1937, almost all of India had been conquered by the British Empire. The last major threat, the Maratha Empire was absorbed in 1818. Shortly after, Dutch India was sold to Britain in 1824, and the British government assumed control over the area from the East India Company in 1857 following the Seypoy Rebellion. After the incorporation of Danish India in 1869, onl the Portuguese and France colonies remained. The early 20th century saw many new administrative reforms, perhaps most notably the partition of Bengal in 1905. It also saw majors calls for autonomy and independence from both Hindu and Muslim communities.

Belgian Gentleman on 8/12/2017.
superb historical map that is perfect in almost every small little detail. The amount of effort and reseach put into this map is absolutely amazing. Keep going zxctycxz!
4 out of 4 people found this review helpful.
Review by

on 8/15/2017.
It's a good map, but there a couple of issues that prevent it from getting 5 stars. First, there are far too many non-contiguous territories, which makes it very difficult to see how they connect.

Finally, there are still a few broken connections that interfere with gameplay.
3 out of 3 people found this review helpful.
Review by

on 8/12/2017.
Beautiful map, great size, obviously took a lot of research, but some of the bonuses are really big. Great map in all, though! Nice work as usual!
1 out of 1 person found this review helpful.
Review by Lord Alexander on 9/30/2020.
Excellent map; they must have spent a load of time making it. Thanks so much for adding to the entertainment value.
0 out of 0 people found this review helpful.