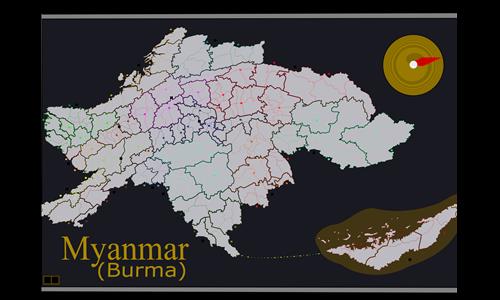 A map of the country of Myanmar (also called Burma).
I have used administrative divisions which create bonuses which don't have too many territories in them.
This map contributes to the list of countries which warlight has maps of.
My previous map was of the mostly unrecognised Arabic region of Mashreq.
It should be noted that recently (march 2016) Myanmar had its first non-military leader elected since about 50 years ago, signalling the end of a period of poverty and oppression.

Belgian Gentleman on 9/5/2016.
The dark-grey empty distance between the bonusses certainly make Burma look more tidy in a good way as well as the colours of the bonusses that add it up. My only complaint though would be that some territories are too big to fit in their decimal digit numbers respectively. But aside from that, it is pretty good.
Response by map creator

҈ * TeeMee123҈ * on 9/17/2016
Thanks for the feedback, but what do you mean by "too big to fit in their decimal digit numbers respectively"?
3 out of 3 people found this review helpful.
Review by Andalorium on 9/6/2016.
So the "area" bonuses you have made the border the same color as the background causing confusion as to what actually connects, because it appears as if Gyobingauk and Kyauktaga, Kyaiklat and Kungyangon, and Nanhkan and Mansi should connect and don't, and that Oktwin and Nattalin, and Dedaye and Maubin they connect but there is no apparent connection between these territories, I really wanted to like the map, but with this many connection issues it's hard for me to really love it
Response by map creator

҈ * TeeMee123҈ * on 9/7/2016
In my mind it seems you're really nitpicking it there.
I've found one of the connections you mentioned (mansi and nanhkan) but I need to know the bonuses the others are in otherwise it will take too long finding them.
Could you move this conversation to PM?
1 out of 1 person found this review helpful.
Review by

on 9/7/2016.
Really great map! I love how you put small gaps in between the bonuses. Great job!
1 out of 1 person found this review helpful.
Review by