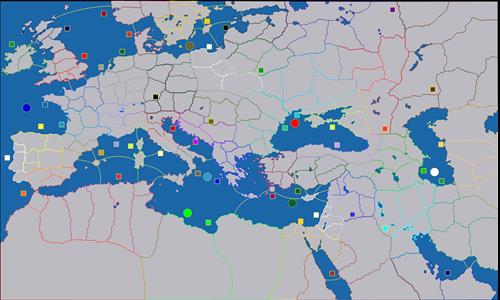 This is a small fun map I made.The territories are identical to the Stainless Steel 6.4 mod for Medieval 2 Total War.Enjoy!

on 9/4/2016.
Nice average sized map for 3-6 players. Pity that there are no distributions modes other than the standard ones. I have a few reserves on territory and bonus names: I don't get if they are supposed to be in a specific moment in history or are just random. i.e. "moorish africa" would comprehend all of africa, and southern spain and italy at a certain point. If "Crown of Castilia" includes "Leon" then it is likely to be after unification of the Crown of Castilia and Leon...
For the rest, I found it enjoyable in a 4 pl FFA game, though some bonuses seem very hard to hold (i.e. moorish africa or north germany).
Pskov is wrongly connected to Mensk (Minsk?).
Response by map creator

on 8/29/2016.
Another solid edition of the Europe/Near Middle East variety. Optional superbonuses would be nice to increase its strategic value.
Response by map creator

apollong3 on 8/29/2016
I will consider adding superbonuses should an update be needed.Thanks for the reveiw!
1 out of 1 person found this review helpful.
Review by Andalorium on 8/29/2016.
The only thing that i was wondering was why Turku and Uppsala did not connect, they are close enough to, but anyways good map
Response by map creator

apollong3 on 8/29/2016
I will consider adding it should an update be needed.Thanks for the reveiw!
1 out of 1 person found this review helpful.