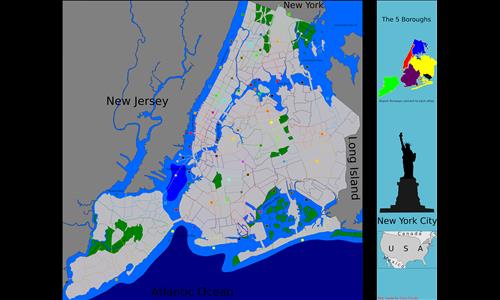 A rather large map of the New York City.

Disclaimer: I dont live in NYC nor have I ever been to it, so if there are any things inaccurate, that people who live in NYC or know much about find, I am truly sorry about it.

on 8/2/2016.
Great map! It's fun to play, and the borough distributions actually seemed to be fairly well-balanced, which doesn't happen all that often when distributions are based on real life. Kudos.

I didn't see any inaccuracies, but then I'm only really familiar with Manhattan.

I do have a couple of suggestions for improvement:

- You could make the Triborough Bridge its own territory as it crosses through Randall's Island and Wards Island, in the same way that the Queensboro bridge is separate from Roosevelt Island.

- A connection between JFK or some part of eastern Brooklyn to Far Rockaway / Bayswater would be helpful to avoid dead-ending large numbers of troops.

- I recommend creating more, smaller bonuses on Staten Island. It can take too long for players starting there to capture their first bonus.

I was thinking of making the Bridge a seperate territory, but cancelled that idea, since there is not enough space to display the army numbers then.

My mind was also divided about your suggestion of a connection between JFK and Rockaway. I cancelled that idea too, since there is no real connection or street between there. But I see your point about the dead end. I could maybe do a territory that respresents a street going around JFK and connecting Far Rockaway with Rosedale.

The thing with Staten Island is that all Boni are created after administral divisions. For some reason they are hella big in Staten Island. If I find a way to accuratly divide them, I will do that.

I see that Staten Island is rather isolated, of course. I played around with the idea of creating more connections. 1 idea was to put more territories along the Hudson, but I again cancelled that idea, since I wanted to have a map of just the city itself.
I plan on expanding the map and upload it as new map.
4 out of 4 people found this review helpful.
Review by

4/5
3 out of 5 people found this review helpful.
Review by Andalorium on 9/5/2016.
Decent enough map there is a connection issue between Williamsburg (Central), and the Brooklyn Navy Yard, but other than that all seems to work well
Response by map creator

Cata Cauda on 9/5/2016
If you zoom in a bit, you will see that those 2 dont connect. So its not really an issue.
1 out of 1 person found this review helpful.
Review by