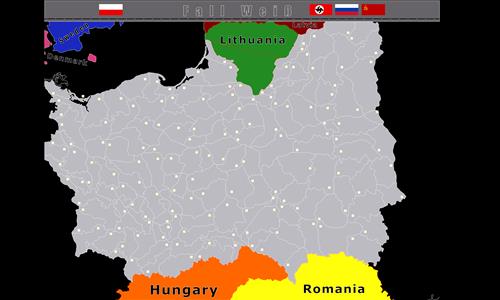 A map that recreates the Invasion of Poland of 1939. Many territories have been added to create this map more strategy based with army bonuses representing the number of military factories in each territory.

on 8/24/2016.
Very cool idea! Are you intending to create maps for all of the various scenarios envisioned by German planners prior to WWII? That would be crazy awesome!


Players beware - the scenario-based nature of this map makes it inherently imbalanced.


One broken connection - Lida should connect to Postawy.
1 out of 1 person found this review helpful.
Review by

on 9/26/2016.
Colorful and clean, if not a bit flat.
0 out of 0 people found this review helpful.
Review by Andalorium on 8/30/2016.
Mid sized map, but the bonuses, with 15 and 13 units for holding a signal territory when there are are territories with no bonuses at all, at least by default. spread out the wealth or at least balance the map a little better the west will always have the higher chance of winning when all numbers 10 and above are either dead center or off on the "west coast" of the map
0 out of 1 person found this review helpful.