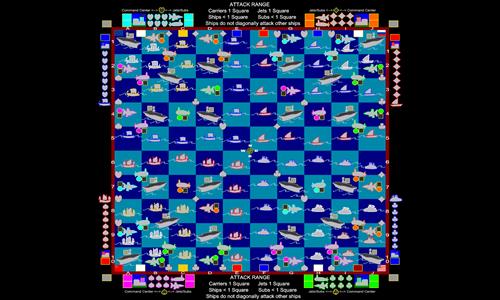 Command Centers connect to Transit Points, which in turn connect to Jets/Subs. Negative bonuses (subs & jets) are used to dissuade enemies from seizing your attack routes. Attack ranges are listed on the top and bottom of the map.

Colors (of jets/subs) and suits (of transit points) function as "uniforms" or "flags" for identifcation purposes:

on 6/3/2016.
This is an exceptionally clever map; the second of its kind I've seen on Warlight, using negative bonus structures to enable a particular theme in a very creative way (the other is "Dead Frontier", for the zombie genre).

However, I think the "boardgame" look of the map holds it back a little bit. Connections are not at all obvious (particularly the card suit system is very obscure).

I would like to see a version of the same kind of bonus structure with a more "map-like" map.

Additionally, the ships are different for each nation, while the subs and planes are not. It would be better the other way around, I think, since it's the subs and planes which are "nation-specific" and hard to track. The visual distinction would make it easier to see what's what. If Russian subs looked distinct from US subs, for example, it would make the map easier to read.
Response by map creator Guiguzi

on 6/6/2016
Good suggestions. Maybe a mapmaker with more time will use your ideas and my map mechanics to create something interesting.
2 out of 2 people found this review helpful.
Review by Andalorium on 9/11/2016.
I like Both Checkerboard Naval War maps, I like how the second one was similar, but different enough to present a new challenge well done, I'll be watching out to see what else you've made.
1 out of 1 person found this review helpful.