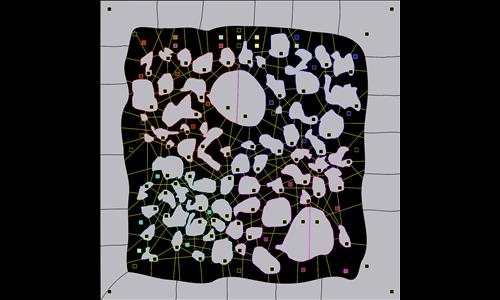 A group of islands with a land border surrounding it. This is my first map that I have completed and I appreciate any feedback that is given.

on 9/18/2016.
First cardinal sin: You have territories for Nintendo DSi and New Nintendo 3DS, but not one for Gameboy Color?? imo it should be reversed ;)


It's a fun and simple map, but it's not without some faults. You have 3 Super bonuses that each require ownership of at least half of the map, that's pointless because the player benefiting from the bonus will already win anyway (plus they already got a ton of bonuses from owning that much land anyway.) Then there's the connection lines. Having them cross is fine, but when too many of them cross it gets confusing to view at a glance, especially when some bend at sharp angles, or hug a wall. Either delete a ton (will improve gameplay,) or make the whole map bigger so you can space the lines out and make them neater.

A piece of advice, from someone whose made a lot of maps: Listen to repeated criticism. If a few people are saying the same thing then it might be wise to alter the map. It will help you grow as a map maker and you'll produce better maps in the future.
2 out of 2 people found this review helpful.
Review by

on 6/11/2016.
It's all right, not bad for a first map. But the thing is, those island connections are really hard to see! If I were you'd I'd delete some of them to neaten the map, and it won't affect too much.
Also, after seeing the name, Battle Islands, I was hopeful to see a Chaos map. (He made the Battle Islands series.) But the words 'Battle Islands' are both really common so I can't really get you for that.