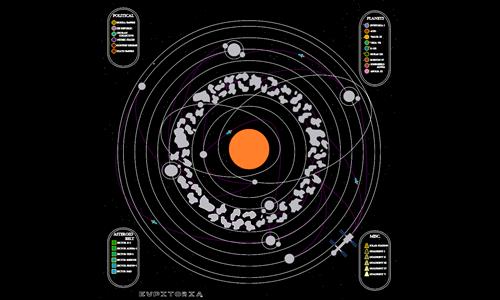 on 4/20/2016.
This map suffers from the same problems as the Imperial Sovereign map. Specifically, it has no distributions for a tiny map and contains massive, single-territory bonuses. Add to that the difficulty of seeing what connects to what and this becomes a mess to keep track of.

As with your other map, I recommend creating a few distributions. Also, the purple lines connecting objects do not show up well. Perhaps you could use bright, bold red lines to connect territories lying in substantially different orbits. Finally, the high-value territories need to have a lot more connections in order to de-randomize (is that a word?) gameplay.
Response by map creator Mooniepie on 5/1/2016
Hello, I have acknowledged a few of the suggestions on your prior comment on the Imperial Sovereign map. As for the bonuses for the "single-territories" (of which there are only three)and the double-territories, I had a system for deciding how many troops would be granted for holding them. # of territories in the bonus area # of connections to those territories (Omitting the connections between the territories in the bonus area). And during the several tests, I did with a friend of mine, I found that the bonuses were rather fair. However, I am aware of the great unbalance between the planets and the rest of the map; this was very much intentional. I do not enjoy maps that have really well-balanced bonuses, for that is not realistic. In warfare, there are areas of more strategic importance. Now, I am aware that most implement this idea by using connections, and not bonuses. I, however, think this is an unrealistic approach.
0 out of 0 people found this review helpful.
Review by

on 4/23/2016.
This map is extremely difficult to play on, but I do really like how it looks, except for the white orbits. The "sea connections" need to be a lighter purple too, though.
Response by map creator Mooniepie on 5/1/2016
Thank you Ninjanic. (I just want to throw in here that your maps are incredible and I've been working on a new map for the last week that is heavily inspired by your work) I am aware of the annoyances of some of the territory connections on this map, especially for those who play Warlight on the mobile app. The very distant connections between territories and the color of the connections are at fault for this. Personally, I very much like the connection color and played around with several before deciding on this shade of purple. As for the distant connections, I very much enjoy the element it adds to the map. It allows for someone to circle the entire system very quickly, which forces players to be more precise in how they distribute and move their troops. As for the orbits, I cycled through several colors but couldn't find one I liked, but I very much agree with you.
0 out of 0 people found this review helpful.
Review by Andalorium on 10/21/2016.
Decent map, and I like the idea, keep it up.
0 out of 0 people found this review helpful.