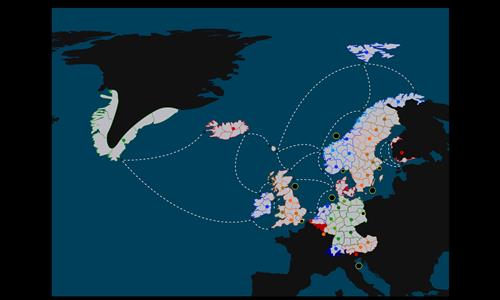 on 5/18/2016.
This map was very challenging. It has a lot of connections to keep gameplay moving swiftly (Alesund to Bronnoysund is a masterstroke), yet it boasts enough massed areas to make conquest and consolidation worthwhile. The isolation of Greenland is not a big a benefit as one might think, particularly because of the necessity of diverting armies to take it.

I have only one criticism - that Flanders and Bournemouth connect, but apparently shouldn't - or else there should be a physical line connecting them.
9 out of 9 people found this review helpful.
Review by

Ox on 5/22/2016.
Why obsess over "what's Germanic and what's not?" - when was accuracy important in WarLight's strategic maps? Look at Medium Earth!

Point is, I really like this map; it has lots of double-borders, sea connections, and plays really well. I'll be making some template on it because it's fun, unique and nice!
8 out of 11 people found this review helpful.
Review by

MoneyMakingMitch on 5/1/2017.
,
0 out of 1 person found this review helpful.
Review by Angry Koala on 5/18/2016.
Named "European Germanic languages" when it should be actually named "Nations where Germanic languages are dominant".
Many zones are not added here: Alsace, Frankish Lorraine, French Flanders, German Wallonia and minorities in Eastern Europe.
On the other hand, many territories are irrelevant to the "theme" and have been added to this map: Ireland and Wales (that are mainly Celtic nations), Finland regions (Åbo) where Swedish is spoken by less than 6% of people, Saami regions aren't Germanic either, and Greenland is mainly populated by Inuits.
If it was really about Germanic languages, the map should have been divided according to Germanic language families instead of nations.
And last but not least, Lichtenstein is omitted, many regions such as the ones in the Netherlands have wrong names (see thread).

Edit: Answering Imp, vague criticism? Tell me how? since I detailed many errors you made, about Finland check your thread would you before telling lies everything is detailed there, but you kept ignoring it.
Response by map creator

Imperator on 5/18/2016
"Liverpool" was renamed to "Wrexham" before publishing. Everywhere on the map is named after cities. There is no reason to name the ones in the netherlands after provinces.

Liechtenstein is included, it's just that it's too small to have it's own territory/bonus.

Ireland/wales are not mainly Celtic. In wales 19% speak Welsh, and 99% speak English. In Ireland 36% speak Irish, and 94% speak english.

It is true that there are some regions that have minorities of germanic speakers spread around in europe, but they are too small to even represent on a map; Case in point, German speaking belgium.

While I do appreciate criticism, I do not appreciate vague criticism. You say "Finland regions where Swedish is spoken by less than 6% of people", which is really just unhelpful. How am I supposed to have any idea what regions you're talking about?


EDIT: I already posted screenshots and everything in the thread, in which the only place you named was turku. I want names of finland regions that should be taken out.
2 out of 9 people found this review helpful.