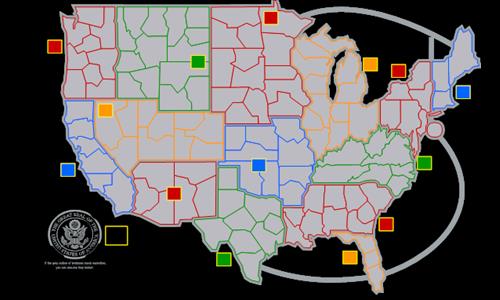 on 3/29/2016.
I like the map and the connections you have created. Adding some western links wouldn't hurt, but I'm not persuaded the map suffers without them.

My primary issue is with the huge bonus areas. They are too difficult to capture and hold in the early game, meaning initial positioning (i.e., those near smaller bonuses) will generally be outcome determinative.

You might consider retaining the large regions as superbonuses (albeit with a reduced bonus value) and award territory bonuses for each state controlled.
7 out of 7 people found this review helpful.
Review by Byterapper on 3/15/2016.
I think an additional layer of state bonuses wouldn't hurt, also a bit higher bonus/territory in central, hard to defend areas.
Shortcuts in the west wouldn't hurt, maybe Corpus Christi to San Diego (via Panama Channel in case you want to leave it at sea) and from San Diego to Olympia