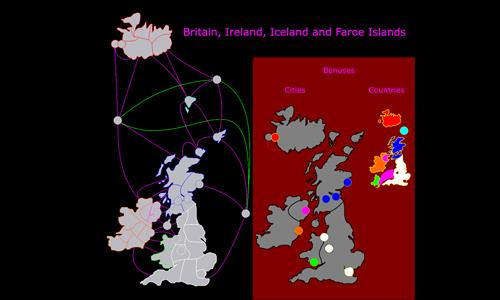 --- Description by Creator ---
- For the best layout of the map, some provinces are omitted and statistical regions may be used instead. I prefer more strategy involved instead of imitating the real borders.
- This map is a part of a larger map which is named Europe Without Strict Borders. It is yet to be released. EWSB is intended to be compatible with both normal WarLight rules and diplomacy game.
- Bonuses are in major cities and larger political divisions.
- Territory names in chevrons are made-up due to omission of several area names.
- In my recent games with this map, I observed that balance was subtly achieved when only 3 players remained on this map, thanks to the additional connections that I added. I'm surprised that it actually works in the way I wished it to be.