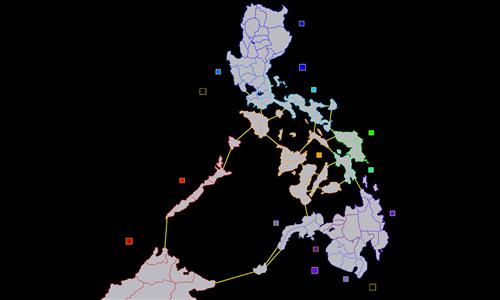 This is my first map! Hope you guys like it!

The territories are all of the Filipino provinces, so it isn't too large. Please enjoy!

on 2/28/2016.
Good looking map. Solid gameplay, and fun to play on especially with 2v2.
The south is slightly over powered though.
Response by map creator ThoriteGem on 3/16/2016
Thanks Nic! It should be fixed now!
1 out of 1 person found this review helpful.
Review by Nathan

on 3/29/2016.
The map is laid out well, with the connections being intuitive and intelligent. As another reviewer commented, the south is decidedly overbalanced.

Just as significantly, however, is the imbalance of the bonus arrangements. First, the bonus ratios vary markedly. Players get two armies for controlling both territories on Leyte, but only one army more for conquering all six Malaysian territories (also, why is Malaysia included in a map of the Philippines - spelling error in the title, as well?). Moreover, the superbonuses are skewed.

It looks a lot better - thanks! I see what you're going for with the overlapping superbonuses. I still would split the Visayas into a couple of smaller bonus regions.

Also, it's spelled Philippines. :D
Response by map creator ThoriteGem on 3/29/2016
Yes, thanks for the feedback! I've got it fixed now, so hopefully it'll be more balanced than before!