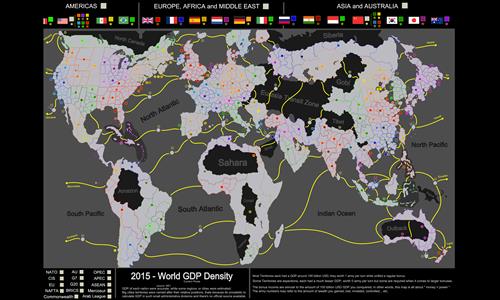 Have you ever wonder that economy > millitary in modern days? Well, here comes an economic world map, which territories and bonuses are totally based on 2015's world GDP distribution.
(source : IMF, nominal and other regional GDP datas.)

Some facts you need to know about this map :
1.Most territories had roughly 100 billion US dollars GDP in each during the end of 2015, they worth 1 army when unified a bonus.

2.Same as the Asia population one, some territories are exceptions, which had less than 100 billion US dollars GDP in each and worth 0 army .

4.A lot of geography might look weird (ex: Eurassia transit zone) due to inequality between regions distorted their real shape.

5.For more infos, check the bottom of the map !

on 5/17/2016.
Great concept, great map. It looks and feels like a huge global map, and it is, but it sure doesn't play like one. Much like the Strategic map, the large spaces excluded for (in this case) economic reasons give the rest of the world a much quicker flow. Africa and South America are relatively small, while Japan dwarfs the Middle East and India.

It's not so much that a different strategy is required here, just that players must discard their ingrained understanding of how far away (in terms of number of territories) places are from each other.
12 out of 12 people found this review helpful.
Review by Loxiiv