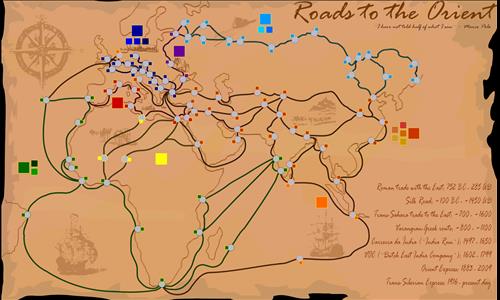 Roads to the Orient

Throughout history, East and West have been trying to connect: for trade, for cultural exchanges, to conquer, convert or go on a vacation.

This map combines a few famous routes (in a historical mismatch) from West to East and back: the Orient Express, the Silk Road, the Portuguese "India Run", the network of the VOC, the Trans-Sahara routes, the Roman trade network and the Trans-Siberia Express.

Routes are chains of territories, only connecting with other routes on few points. Bonuses are for complete chains, plus a small bonus for each territory.

on 2/9/2016.
It's a great concept and reasonably well executed. I always appreciate the use of history in mapmaking.

I give it four stars primarily because of its inherent linearity. While not as linear as a pure tug-of-war - it does offer some flanking options, particularly in the Mideast - it still can devolve into a slogging match of stack races.

A possible remedy, and one keeping with the map's historicity, would be to include the real-life regions adjacent to or encompassing each trade entrepot. For instance, create Italy as a territory that borders both Venice and Rome. Similarly, introducing other territories (perhaps throughout, perhaps only in some areas) such as Persia, the Sahara (maybe with a negative bonus) and Germany (or the Holy Roman Empire) would add great depth.

It may also have the effect of making some of the more strung-out bonuses easier to capture and maintain.
3 out of 3 people found this review helpful.
Review by

psykkoman on 2/8/2016.
I like the concept, map is trickier than it looks. Historical (essential) nitpick - "Roman Trade" was established by Phoenicians actually, and dating it back to 753 BC is pure nonsense, as Romans did not have navy before Punic wars. At 753 BC, Rome was nothing but petty village, while Phoenicians ruled the whole Mediterranean sea at that time.
4 out of 6 people found this review helpful.
Review by

GeneralPE on 2/11/2016.
Good map, but only 4 stars. You should add more connections - while historical routes are nice, some places next to each other should be connected. Trebizond and Aleppo, Venice and Munich/Vienna, Brussels and Paris, Sofia and Bucharest, Madras and Goa, Yaroslavl and Nizhny Novgorod, Balkh and Samarkand, Berlin and Frankfurt, Amsterdam and London just to name a few. It would vastly improve playability and would make it 5 stars
2 out of 2 people found this review helpful.