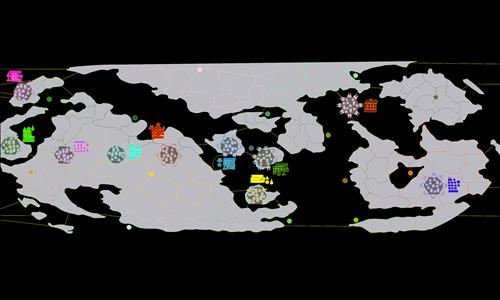 Once upon a day I had an idea. When I played one of the stages in the long abandoned (emergency blockaded :P) game called SPORE and it pinned my mind into strategies and I said: "This stage is okay, but it needs multiplayer." And so this map was created in purpose of this descritpion.

This map is based of a randomly generated planet harvesting civilized tributes discovered
by my spaceship.

Zephyrum on 2/5/2016.
(Great to know I'm not the opnly person who really wants multiplayer Spore. :P)

The game itself gravitates towards cities, but having distributions in cities, that is more than fine by me. Specially when the actual game pretty much works the same way, hehe.

Names are creative (The game's name generator only allows you to name cities, so the territory names are completely made up) and the map is very pleasing to look at. The one complaint I have is that you are a horrible city builder. Yamderes' building distribution gave me cancer. But the name compensates that. :P

Judging by my knowledge of Spore, either Keplin or Hogencair was your capital/starting point, right?

Either way, this is a very interesting little map for a q1uick cities-based game. Worth a shot to try it out. Not perfect, but great. 4/5.
Response by map creator

BlazinCake on 2/6/2016
It is an honor to hear out your standings about this map. Next maps are gonna be far better than this first SPORE-based map in WarLight, ever. ;D.
(Oh yeah and... I found this world with Civilized Alien AIs when flying around in Space Stage.)
4 out of 4 people found this review helpful.
Review by Nathan

on 2/9/2016.
Fantastic map! The cities add a distinct layer of depth to gameplay. Even though they are hard to defend, the bonuses within them are easily captured and recaptured. None of them is so large as to make their acquisition crucial or there loss unbearable, which is very nice.

The "rural" territories also have a nice bonus ratio, which makes it worthwhile to pursue the strategy of locking them down first, particularly given the isolation of the northern continents.

If I had to make any recommendations, they would involve connecting the northern continents more to the southern to alleviate turtling concerns. Also, while splitting the edge territories makes sense, it can be a little complicated to understand at first.

BlazinCake on 2/6/2016
Thanks for the review. In the meantime I'm planning to create more of these easy made maps since many of us already love this. Not to mention: The more I create, the better the creation. ^^
3 out of 3 people found this review helpful.
Review by Andalorium on 1/7/2017.
Loved the map, not having played Spore I had to look it up, and am now interested, sounds like fun.
1 out of 1 person found this review helpful.