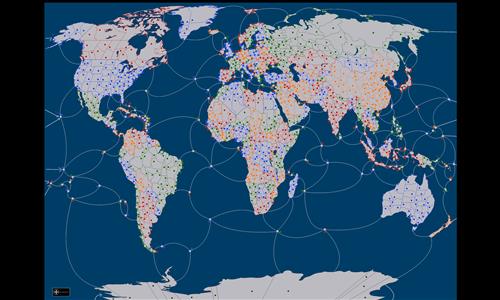 I do apologize that the borders for a lot of places are pretty weird and jagged. However, after doing pretty extensive testing on this, I've found it's actually pretty useful for making historical scenarios.

Review by Zephyrum on 4/15/2016.
AMAZING in every aspect! The spiritual sucessor to World Nations 2014... Except much bigger, much more beautiful, considerably better crafted, better balanced and realistic... In general, just FANTASTIC for anyone aiming to make diplomacies. Very easy and intuitive for newcomer template makers to use too, so expect quite a lot of these on the following week as open games!

Feels great to see this done! Been waiting for so long! Easily on my top 3 maps! 5/5 Favorite instantly!

The ONLY downside to the map is the insane amounts of jagged borders; the borders look quite weird. Still pretty darn good and well made. Excellent job, Imperator, and keep up with the amazing maps!

Proud to test/distribute <3 And now I'm off to make some games on this b e a u t i f u l map! :D
Response by map creator

Imperator on 4/15/2016
Thanks for the review and for helping out so much during development! I really do appreciate it :)
18 out of 18 people found this review helpful.
Review by

on 4/15/2016.
This map is the bomb! A little crowded in Europe, but still beautiful! Good job!
9 out of 10 people found this review helpful.
Review by

5/5
4 out of 5 people found this review helpful.
Review by Andalorium on 10/31/2016.
Not my favorite but definitely fun, the single territory bonuses always throw me for a loop, I still have not decided whether I like, love or hate them. Strategy is great but there are some connection issues still needing a fix

Otherwise great job.
3 out of 3 people found this review helpful.
Review by

on 4/20/2018.
You probably want to play this map in teams, big teams, otherwise, you end up with lots of territories, lots of armies, lots of moves and that can become difficult to play. I played it in a 2v2 setting, that was fun, but at the end of some games, I had to spend close to 2h placing armies and making moves.
2 out of 2 people found this review helpful.
Review by

number on 8/4/2018.
Just a warning to anyone that plays this map, Tuvalu and Hawaii on the left side on the map are not joined, even though there is a line drawn between them.

Ranek on 5/12/2016.
Even though it is not the first of its kind, it is very well done and benefits a lot from the different colours for each country. The bonus system is somehow exaggerated. The range of values from 1 to 9 is too big in my opinion.

I only checked germany in terms of accuracy:
Dresden is completely wrong - the biggest city in this district could rather be Frankfurt.
At least, why are some territories named after cities while other are named after countries (for example: belgium, czech republic, slovakia and others.)obviously they could be named after their capitals
5 out of 10 people found this review helpful.
Review by

[IA] Rezgo on 10/30/2019.
4.5 There are a few issues with territories that aren't properly linked but overall this is one of the best Warzone maps as even the less significant countries still are broken up into internal regions. This is great for grand strategy Diplo game.
0 out of 0 people found this review helpful.
Review by Balsim