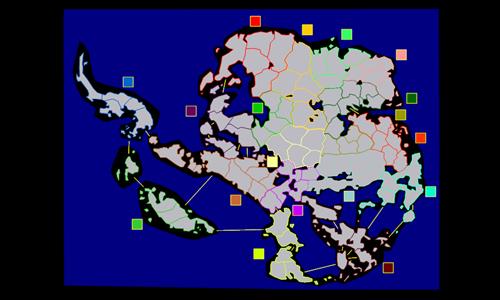 In a world where the ice has all gone away, a new frontier was formed from under the great cap: Antartica. Plants started growing where there were once barren ice. New animals started making homes here. And the human race one again succumbed to its merciless greed. Crippled by its mistakes- and after much loss of life, and the drowning of the great cities of the world, humans find themselves with a new opportunity, a new jewel, a new chance. This, folks, is the post-melt world of Antartica. Immediatly people laid claim to it, and not long after, the conflicts formed... and then war broke out for the dominance of this new, blessed jewel that was made by the greatest mistake of humanity.

My Fifth Map Overall (Fourth to go Public)
My First Map of the Post-Melt Series
My First Map with a specific Intent in mind (1v1).

Enjoy this map! Distributions will come in 1.1! Feel free to make suggestions for Distribution modes!

on 2/7/2016.
Very enjoyable map, viaually appealing and without mistakes nor glytches as far as I have seen it (that is, a couple of single player games).

I apreciate the 2-player size (though I believe that also 2vs2 or 4FFA can be played with joy on this map) and the "futuristic-catastrophistic" scenario!

I might add comments after a few PvP games, that I'll ssetup right away.
1 out of 1 person found this review helpful.
Review by

SATS on 5/4/2016.
I have also played 3v3v3 on this game. But this is very good map for 1v1, 2v2 and 5 player FFA. Well Balanced.
1 out of 1 person found this review helpful.
Review by warhawk on 10/4/2016.
An average Warlight map, however there is no way to avoid the center core of the map for very long. You will have to attack or defend (if that is your thing) early an often.
0 out of 0 people found this review helpful.
Review by