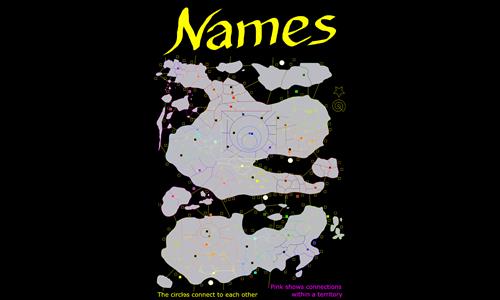 This is the non-diplomacy version of Land of Names.

Review by okasan on 1/18/2016.
Nice map, I like the feature of the circles, which adds a strategic element without being too confusing. Lay-out is clear and without ambiguity.
Linda is having an affair with Calvin, someone should tell Ryan.
1 out of 1 person found this review helpful.
Review by Nathan

on 1/18/2016.
I like the layout of the map, but it needs more chokepoints in the center. As it is, it is nothing more than a killing field that enables whomever begins in the south to consolidate and faceroll to victory.

Also, some territories are part of three bonuses (or even four, in the case of Holly), but others are of only two. This results in severe imbalance in a map that is already prone to favoring certain geographic positions.

1. This nap is suitable for team games and 1v1 but quite small and unbalanced for FFAs. However I have added more connections which should make the south less valuable.
2. Noble territories are awarded 1 bonus value simply to show that they are NOBLE territories. It is recommended to turn off their bonuses.
3. Faulty links all corrected, thanks for pointing them out.
1 out of 1 person found this review helpful.