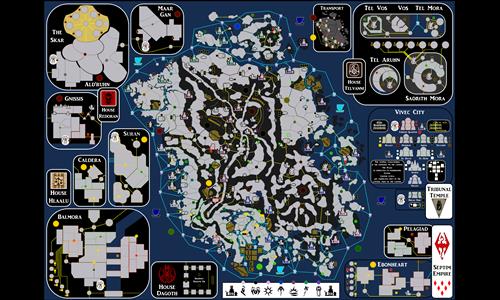 Three aristocratic clans, so called Great Houses, share the island with the traditional Tribunal Temple, the Imperial colonizers and the nomadic Ashlander tribes. Meanwhile the long-forgotten house Dagoth is rising once more, becoming a threat to the very existence of Vvardenfell society.

on 5/12/2016.
This map is incredible! But boy, is it complicated. I think I'll need 2-3 games on it before I finally and fully get it. In any event, keep an eye on silt striders and propylon chambers - they'll get you. Fortunately, the maker has done a phenomenal job of representing everything on detailed minimaps and providing divided territories so you don't have to scroll all over the place all of the time.
Response by map creator Gallien on 3/21/2016
Thank you, Nathan!
I had doubts whether to include the silt striders and the propylon chambers or not, but I thought that they would make the map more interconnected. (There are a lot of mountain ranges that make the map divided into loosely connected regions.)
I hope they won't be too hard to use.
3 out of 3 people found this review helpful.
Review by

Ranek on 5/10/2016.
This map is a pain to play. It looks interesting on first glance and although Im not the greatest elder scrolls fan, it seems to be very accurate. Unfortunately it is extremely confusing and suffers a lot from missing clarity. The center of the map is widely abandoned, which created too many choke points as well. Furthermore it has a lot of negative bonus values, which unbalances the bonus system. I started the first game on random distribution with zero income...
I can see the effort that has been made to create this map, which is a pity, because the map suffers from a lot of issues.
Response by map creator Gallien on 5/10/2016
I never adjusted this map to random distribution on full map. With random distribution on full map you can always start with 0 income if there is an antibonus somewhere and you are unlucky to start in it. You should have used one of the provided distributions or use manual picks to avoid that.