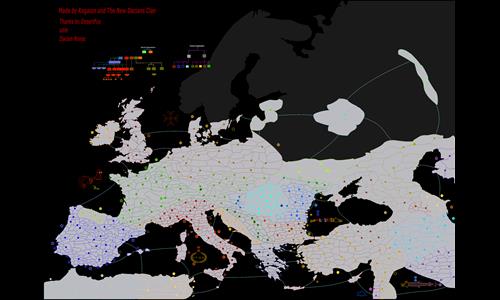 on 3/29/2016.
I really like this map. Although the preview of it makes it look somewhat squished vertically, you lose that sense once you get into the game, probably because it is large enough that you have to zoom in a fair amount to play.

The connections are solid and allow for rapid movement of armies out of hinterlands, which can be a problem when predominantly European maps include bits of Russia and the Middle East.

Bonuses are balanced and well done, including the superbonuses.

All in all - very solid.

I did find one connection that should not exist: Menapi - Norvi
Response by map creator

Kogaion on 3/31/2016
Thanks for your observations. It is my first map and I tried to do all connections but I don't know how, when I save in Warlight after I finish a part of it, some connections dissappear and when I fixed the problem maybe I put some wrong. I tried also to respect historical events. When I made bonuses Also I tried to take into account the population and their number per territory.
15 out of 15 people found this review helpful.
Review by The Strategist on 5/29/2016.
this is not a nice map.
3 out of 10 people found this review helpful.