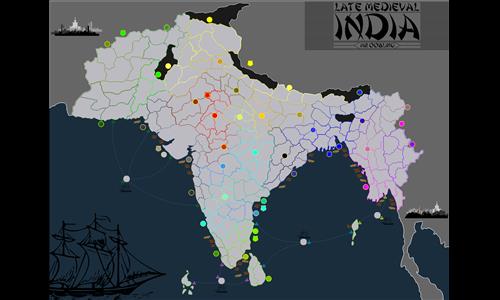 on 1/28/2016.
This map is extremely challenging. At first, I was sure it was imbalanced, so I played several games on it. After numerous playthroughs, I am convinced that it is imbalanced in favor of Persia, but not so imbalanced as I first believed.

That being said, the southern tip of India is immediately at risk from both Burma and Persia, whereas the other two corners can concentrate their fire on a single enemy, at least until mid- to late-game when the meet in the Ganges plain.

I'm not sure if the imbalance in the 3-player scenario can be addressed with map tweaks. Players may simply need to be prepared for asymmetrical challenges.

Although I did not see any broken connections, I do wonder why Vanni (in Sri Lanka) does not directly connect to the mainland, either to Tanjore or Madurai.

Instead of removing the sea territories, you could give them a high negative bonus, forcing players to choose between income and expansion. Also think about connecting Arabian Sea directly to Bay of Bengal.
Response by map creator MrOobling on 1/19/2016
Yes, I was afraid of that from the tests. It seems very hard to fix- the only possible solution I could think of is removing the Bay of Bengal and the Arabian sea. Do you think this will help?
8 out of 9 people found this review helpful.
Review by